Are Tree Planting Drones The Solution To Deforestation?

Treeification > What We're Reading > Are Tree Planting Drones The Solution To Deforestation?

This latest invention could be the fastest and most efficient solution to deforestation. South African Andries Louw and Australian Andrew Walker have started a company named Airseed Technologies to address deforestation. The two drone enthusiasts have developed a prototype drone that uses a combination of artificial intelligence and GPS technology to disperse seed pods at a rate that is 95% faster compared to traditional planting methods. 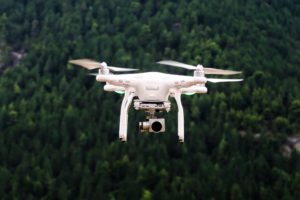 According to the World Wildlife Fund, the world’s forests lose an area equivalent to 48 football fields every minute. This new invention allows drones to plant large numbers of seeds within minutes. It can spit out two seeds per second at velocities of anywhere between 150 and 300 metres per second, allowing it to plant seeds 60 times faster than humans. Andries Louw and Andrew Walker estimate that two drones can plant up to 40,000 seeds into the ground each day. The two partners believe that a fleet of their drones could plant 100 million trees a year from 2023.

How exactly does it work?

This new module designed by Airseed Technologies is called Podder and can be attached to the bottom of popular drone models. Andries Louw and Andrew Walker created a carbon seed pod made from a soil additive called biochar. This highly compressed charcoal is made from the thermochemical conversion of biomass. With the compression of the seeds into the biochar, the pods act as a natural fertiliser. These seeds are inserted into the Podder and are attached to the drone. The drone is then flown above an area that desperately needs trees. The seeds are then discharged from the Podder to the ground. When it rains, the carbon absorbs the water allowing the seed to germinate. The seed then puts down its roots in the ground. The goodness of the pod (biochar) is then released into the root system which will then give the root system everything it needs to grow. One of the greatest benefits of this new development is that every time a pod is planted, they can log its GPS which allows them to measure the success of every seed they’ve planted.

How effective is it?

Tree planting is a costly business. An average tree costs R30 to plant in South Africa. This cost can be reduced by as much as 70% when using drones. Drones provide us with the ability to access remote areas which are hard to reach and are even harder to plant by hand. The germination period can be around 3 months to 2 years, depending on the tree. Historically, the success rate of germination has been relatively low when the planting is done by air. Due to the weight of the pre-germinated seeds, most drones could carry up to 150 seeds per flight. The carbon seed pods made from a soil additive called biochar are light, weighing as little as 5 grams yet strong. This allows up to a thousand seeds in a single payload. The seeds also don’t need to be pre-germinated as the carbon is nutrient-rich and can be infused with land-specific microbes and fungi.

Airspeed Technologies came up with a solution for the payload that was light, smooth, and durable, ensuring that it would not break on impact. This also allows the seeds to be protected from animals. The seeds don’t even need to be buried deeper than 2.5 cm into the ground. One of the greatest benefits is that a single drone pilot can simultaneously operate multiple drones. A team of four people can operate as many as 8 drones amongst themselves. This can potentially accelerate the planting process by as many as 160,000 seeds per day.

How can you get involved?

Deforestation is the second-leading cause of climate change after burning fossil fuels and accounts for nearly 20% of all greenhouse gas emissions which is more than the world’s entire transport sector. It’s unbelievable that the first module was built in a garage in Hermanus, but is now becoming the future anchor for reforestation. Airspeed Technologies is open to working with other companies that share the same interest. For more information, visit www.airseedtech.com.

If you would like to help towards making our planet a little greener, why not start with a tree? Just Trees is located in the Western Cape and Gauteng has a wide variety of trees that are suitable for all landscaping projects. Visit www.justtrees.co.za to make your purchase today.